Oh SNORE!!!!!! I HATE dieting!!!! But one of the downfalls of being over 35 and female is my perpetual difficulty in losing weight. Hopefully this isn't TMI, but I have been working out seriously with a personal trainer for almost two years, cook and eat relatively healthfully (aside from Sunday pizzas and goblets of pinot noir) yet my stubborn body refuses to lose weight. Its ridiculous. So drastic measures must be taken and I've decided to try the South Beach diet at my trainer's gentle suggestion, which means I have to give up my favorite things such as WINE, CARBS and FRUIT. Cold turkey. For two lengthy weeks. I really had to muster up the fortitude for what I assumed would be misery and I'm happy to report that after a week of phase one I'm still alive, feel better than ever and have been sleeping like a baby. I only lost two measly pounds after this self imposed torture and trips to the gym, but maybe muscle really does weigh more than fat?? This is an uphill battle for me as I am a Daddy's girl, and while my mom could have been a stand in for Audrey Hepburn as you can see below...

I unfortunately did NOT inherit her lithe, petite 5'2 and 95 pound frame, but instead was gifted the sturdy physique of my father's hearty Scottish ancestors. Ah well, so be it, what's a girl going to do?? We are heading back to Jamaica next winter and I WILL be 20 pounds lighter even if it means I never eat another delicious Homemade Pizza again. Well, ok, maybe just once a month.

So this post does not have very good photos as I took all of them while ravenous with my iphone, but these recipes were all pretty delish and I thought it would be nice to share with anyone else doing South Beach.


The first dinner I made was roasted pork tenderloin with sauteed asparagus. 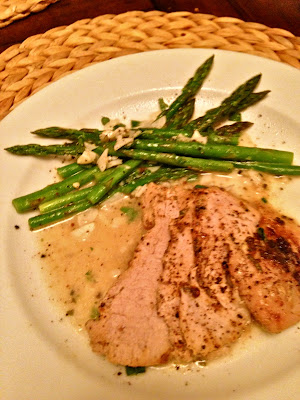 Again, apologies for the poor quality photos but who has time to take a pretty picture when one is ravenous?? This recipe is pretty fab and here it goes...

Brine the pork in a ziploc bag for 4 hours, drain and pat dry. Coat with marinade and let sit in the fridge one hour. Roast in a 400 degree oven for 40 minutes or until the temp reads 165. Let it rest on the carving board for 10 minutes while you cook the asparagus tips.

For the asparagus, heat chopped garlic, 1 tbs butter and 1/4 cup chicken stock in a non stick skillet, add asparagus, cover with a tight lid and simmer about 6 minutes until tender but still a bit crisp. Squeeze fresh lemon juice and serve with the roast. I garnished with fresh tarragon.

Asparagus made another appearance the next night when I made the most scrumptious pan seared black drum with homemade low fat tartar sauce. 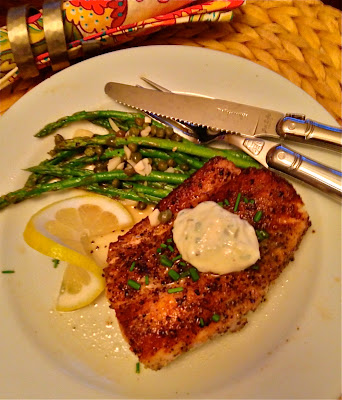 This took literally ten minutes to prepare. I heated a cast iron skillet with about 2 tablespoons of grapeseed oil to medium high heat. Generosuly salted and peppered the fish and seared it 5 minutes on both sides while preparing the asparagus tips as I did the night before but I added capers.

For the tartar sauce:
3 tbs low fat mayo, 1 tsp dill relish, zest of 1 small lemon and fresh chopped chives plus a pinch of salt. Stir together and chill in the fridge until ready. Super easy and tastes decadent without the fat. Hush puppies sure would taste good dipped in the sauce. (Stop it! Stop it right this second Tracy!! I shouldn't think such perverse thoughts).

On another night I made Tuscan style chicken, which was succulent and satisfying.

Then I spotted leftover Asian chicken in the freezer and decided to turn it into a stir fry. This was another easy 10 minute meal thanks to the salad department at Whole Foods. I loaded up on baby bok choy, onions, a few grated carrots, zucchini, broccoli and some shrooms and threw them in a super hot skillet with some peanut oil, a grate of fresh ginger and some ponzu sauce plus a dash of fish sauce and stirred in the deforsted chicken and a grated a garlic clove just before serving. I topped it with some baby pea shoots and it was simple yet luscious. 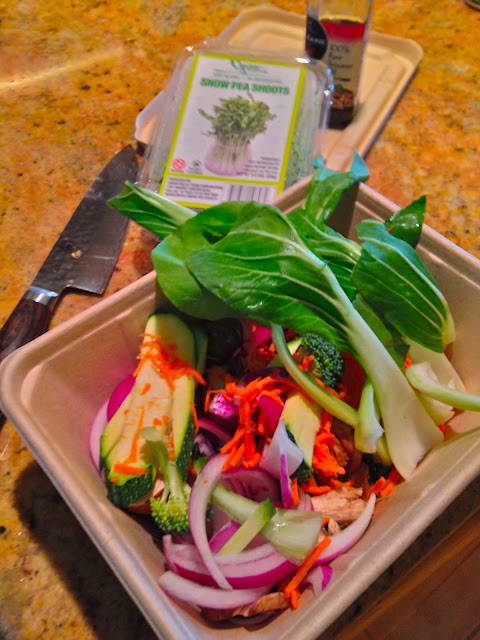 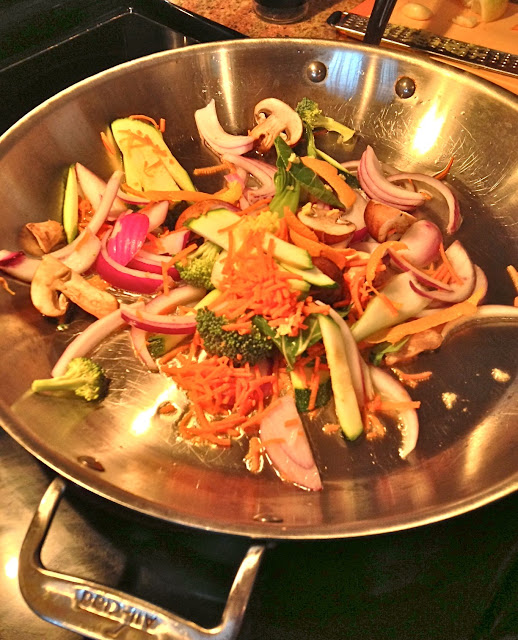 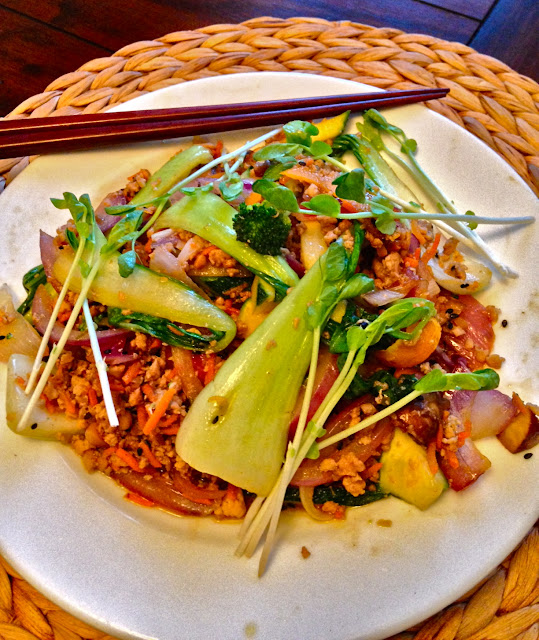 Saturday night was tough as I really like kicking back by the pool with a few glasses of Firesteed Pinot Noir, so I decided to treat my self by making a delectable salad with my all time favorite cheese in the world.... BURRATA!!! Oh what a glorious treat.

Here's how to assemble a super fast and easy salad:


On a chilled plate place a slice of a big, juicy heirloom tomato and sprinkle some sea salt on it.

Toss some baby lettuces in a fast and fresh dressing such as this one.
I just omitted the honey and added a few drops of Worcestershire sauce. Gently place the lettuces on the tomato, add a few slices of more tomato, cucumbers and shaved fennel (all from my Whole Foods salad bar). For a garnish I added some micro greens or sprouts and chopped chives I had leftover from my tartar sauce. 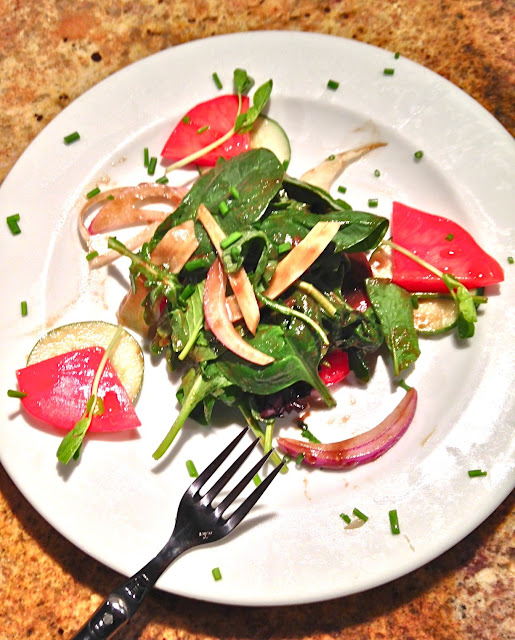 Then for the piece de resistance... Top with heavenly exquisite BURRATA cheese and drizzle with good quality olive oil. 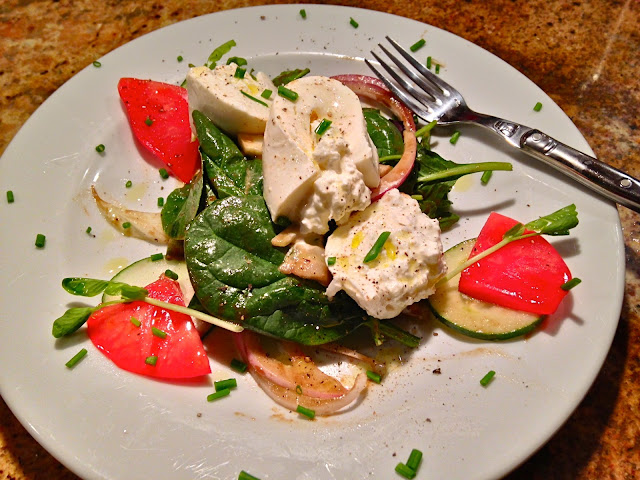 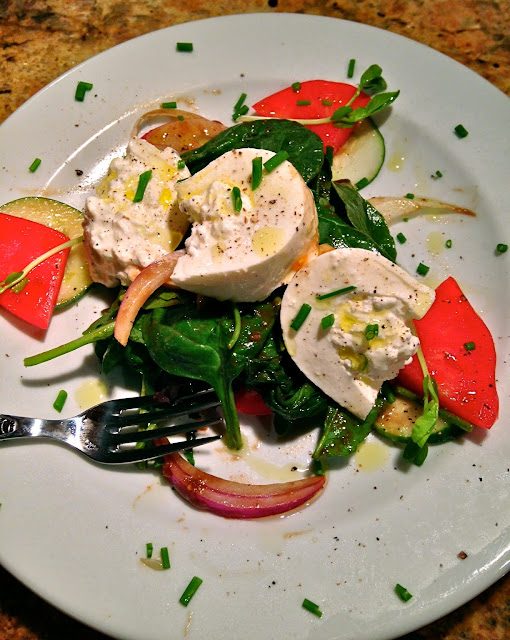 Burrata cheese is just plain sexy. (Perhaps this explains why I have to lose 20 pounds, because I refer to cheese as sexy?!?!) But it is a provocative cheese that gets my endorphins zinging. The very best Burrata I ever had was at A16 in San Francisco. They order it from Gioia Cheese Factory and I almost bought some, but the shipping was $57. I may just acquiesce to my desires and order some for next weekend.

And if you really want to get serious, check out my Ideal Protein Diet recipe ideas HERE.