Pizza on the Big Green Egg 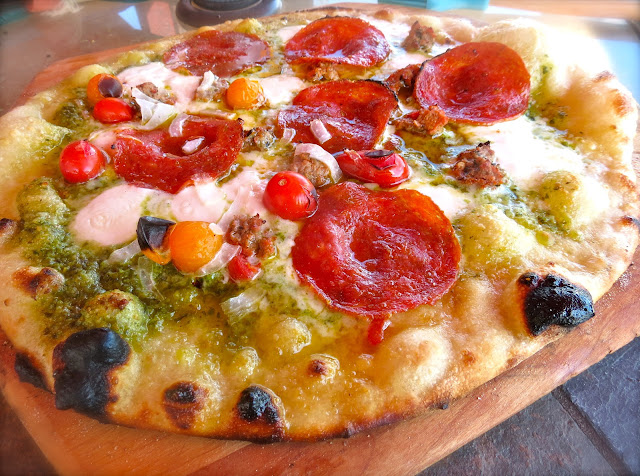 After our success last summer making homemade pizza for the first time, we thought it was time to throw another pie on The Big Green Egg. The Egg really acts like a wood burning oven and produces amazing pizza. We used our recipe from the A16 Food + Wine cookbook again. The result was a bubbly, crispy crust with a nice yeasty, almost sourdough taste. My husband isn't a big pizza or pasta fan, but he ate almost two pizzas! The dough freezes amazingly well, so all you have to do is thaw it in the fridge then let it rise for two hours under a moist towel on a lightly floured surface.

Here's the recipe from the cookbook:

1⁄2 packet active dry yeast
1 1⁄2 cups warm beer(105˚ to 110˚F) NOTE: I've tried replacing water with Belgian wheat beer as it really adds a nice touch to the dough and gets the yeast bubbles popping.
2 teaspoons extra virgin olive oil
2 teaspoons salt
1 tsp garlic powder
1 tsp onion powder (I know this also isn't typical, but it really adds great flavor).
1 tsp sugar (we added this step as that's how our Italian gardener used to make it).
4 cups “00” flour or all-purpose flour (we use Caputo brand and the only place I found it in Austin is Central Market and Mandola's market) 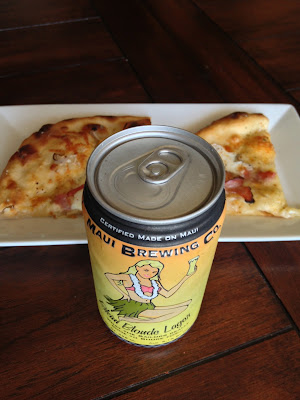 Make The Dough:
1. To make the dough, in a small bowl or large mug, sprinkle the yeast over the warm beer and let proof for 10 minutes. If the yeast has not dissolved into a soft, frothy paste in that time, hunt down a fresher batch and repeat the process.

2. Stir in the olive oil and salt and sugar.

4. Cover the bowl with a damp kitchen towel and let rest for 5 minutes.

5. Knead on medium-low speed for an additional 10 minutes, or until the dough is very smooth, soft, and warm to the touch.

7. Transfer the dough to the bowl, turn the dough so that both sides are lightly coated in oil, cover with plastic wrap, and refrigerate overnight.

8. The next day, punch down the dough with your fist, then fold over the sides and turn the dough over in the bowl. Re-cover and return to the refrigerator for at least 4 hours or up to 24 hours (this makes it taste even better, promise!)

9. Remove the dough from the refrigerator and place it on a floured work surface. Divide the dough into 4 equal pieces. One at a time, cup the pieces in your hands and tuck under the sides until you have formed a smooth ball.

10. Place the balls on the floured work surface, providing plenty of room between the balls, and cover with a damp kitchen towel. Let the balls proof for 1 1⁄2 to 2 hours, or until doubled in volume. Keep a water-filled spray bottle handy, and if you see a skin forming on the surface of the dough, spray the surface to dissolve the skin.

Make Pizza:
1. To prepare in the Big Green Egg, place a pizza stone on top of an upside down aluminum pan placed over the grill plate, with legs facing down over the grill (typically 700˚F) for at least 30 minutes. Raising the pizza stone helps the top brown a bit better. We leave the top bonnet on with the wheel opened. 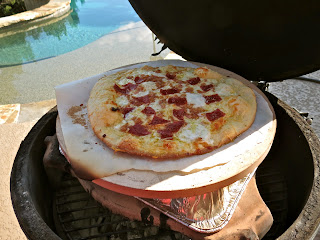 2. To shape a ball of dough into a pizza base, place it on a well-floured work surface. Using the tips of your fingers, pat down the ball, flattening it into a disk. Place the palm of one hand in the center of the dough and gently but firmly press down. At the same time, with the other hand, pull the dough outward while rotating it clockwise to form a flat circle with a slightly raised edge. If the dough feels resistant as you stretch it, set it aside, covered with a damp kitchen towel, while you work on a second ball of dough. This will give the gluten a chance to rest, making the dough more pliable once you return to it. The entire time you are working on the dough, maintain a thin layer of flour underneath it to prevent it from sticking. If you don’t feel confident handling pizza dough, try starting with a rolling pin to ensure you begin with an even circle, and then return to hand stretching. Continue to stretch the dough, allowing time for it to relax as needed, until it is 10 to 12 inches in diameter. place it on parchment paper dusted with corn meal and  transfer to a pizza peel. 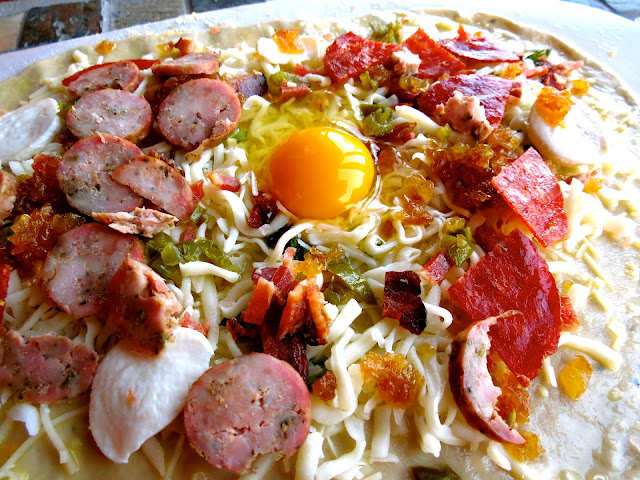 3. Dress the dough with your selected toppings.
We used Fiorucci pepperoni, shredded asiago, fontina, parm and mozzarella picked up at our new Whole Foods. We topped with carmelized onions we'd cooked on low for 2 hours in a pan with butter, balsamic vinegar, salt and 1 tsp brown sugar until they were tender and sweet. I placed a few discs of buffalo mozzarella along the edges. Be sure never to use more than 3 oz of cheese or the pizza will turn soggy!

5. Bake the pizza for 8-10 minutes, or until the dough is crisp and golden brown and the top is bubbling. We drizzled with a bit of Bella Luna truffle oil for an extra punch of flavor. WOW!!!!

I had to peek inside the top to see how things were going... bubbling goodness!! 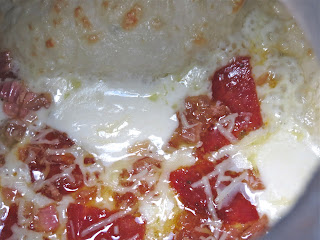 Serve immediately! This is such a fabulous dough, and though it takes at least 48 hours to make, most of the work is happening in the fridge, so you can just forget about it until you are ready to bake it. 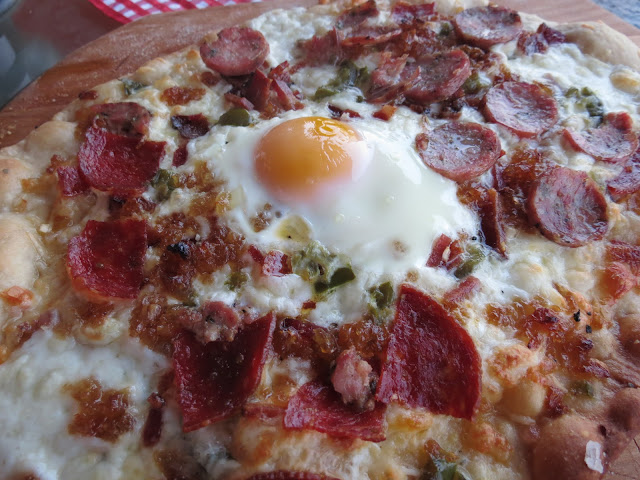 Egg Pizza on the Big Green Egg was eggscellent!! 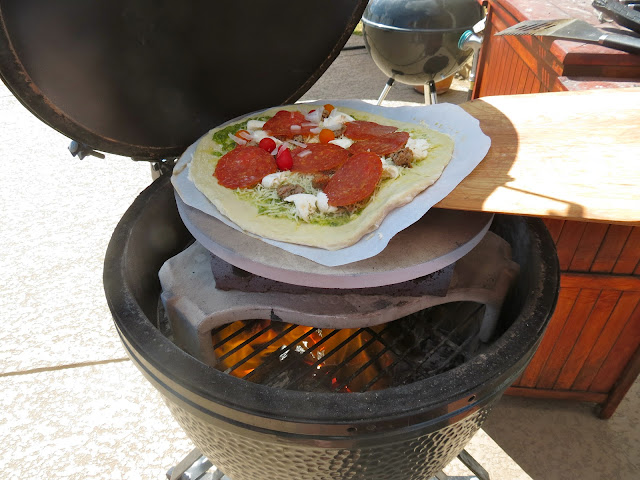 For this pizza we fired up the Big Green Egg to 1,000 degrees F. We put the plate setter legs down, placed two bricks on top then the pizza stone and let it heat for about 40 minutes.


Cooked it for 90 seconds and it made really nice blisters- by far the best one we've made yet! Pesto, meatballs, pepperoni, baby grape tomatoes, shaved onion and buffalo mozzarella. 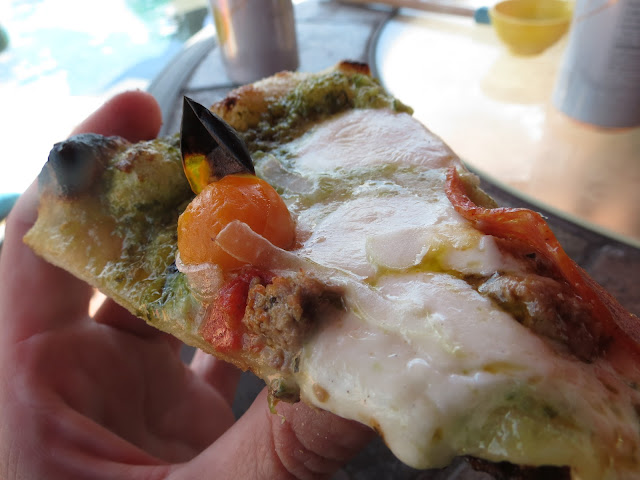