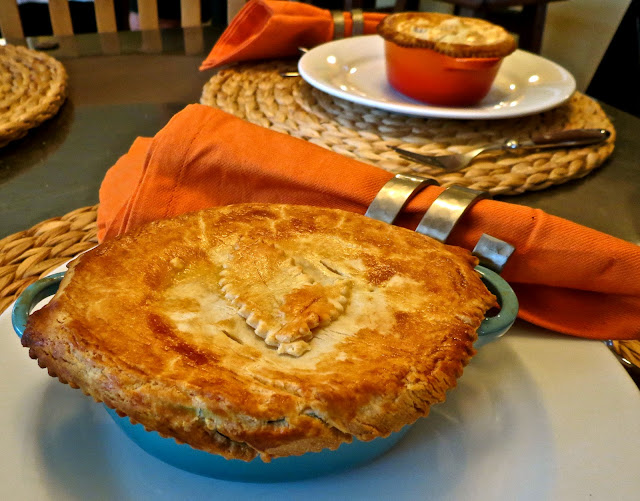 On a recent trip to San Francisco I went to the mother ship of all Williams Sonomas in Union Square. It was my version of heaven- six stories of cooking things!! So I bought a Fagor pressure cooker and had it shipped home. Why have I not bought a pressure cooker years before?? They always scared me as I remember my dad unloading the behemoth of an antique pressure cooker when I was a kid and admonishing me, "Allrighty, now step back little lady!! This thing could blow your head clean off your shoulders!!" Luckily, pressure cookers have come a long way and are much, much safer and easier to use. Dad's had all sorts of knobs and screws on the side and generally looked terrifying to operate. I will admit when we made our first meal in the cooker earlier this week, a Tuscan Stew to die for in under an hour, that I hid in the butler's pantry while the hubs opened the lid. And it was no big deal as we both still have our heads, even if we do have a couple of loose screws :-)

So today it was nice and cool and only 70 degrees out-that's almost freezing here! Wrap the pipes! Drip the faucets! What better than chicken pot pie on a cold day in fall? So we decided to make it in the pressure cooker, but you could make it nice and slow in a dutch oven for 2 hours too.

DIRECTIONS
Turn stove to med- high and add the oil. Season chicken with salt and pepper and in batches, brown chicken until golden- about 5 minutes. Set aside on a plate, add veggies and stir until softened, about 3 minutes. Then add the beer, broth, chicken base and herbs and the chicken.  Cover and set the pressure cooker to high and cook 25 minutes. Release steam and open to find meltingly tender chicken. So good. Or, if you don't have a pressure cooker, stir in the flour with the veggies and some butter before the liquids and herbs, etc, cover and cook on low in a 250 degree oven for two hours.

Remove the chicken and let it cool a bit and in a sauce pan melt butter, add flour and stir in about a cup of the cooking stock to make a roux. Also remove the herb twigs, shallots, garlic cloves and celery from the stock. Leave the carrots. Add the roux, pull the chicken into chunks and put those back in the sauce. Stir in the cream now and the peas.

Then, cut out the puff pastry or pie crust to fit over your ramekins or cocottes, fill them with chicken sauce, cover with crust and brush lightly with a beaten egg. Poke a few small holes in the crust to release steam. Place them in a preheated 400 degree oven for about 20 minutes or until the crust is golden brown. Serve immediately. Then go take a nap... 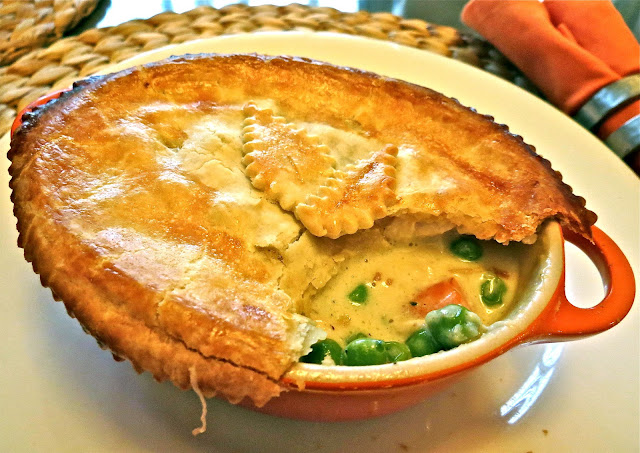 I cut out little leaves for my toppings to make the pies look a bit festive. That's a shred of chicken on the crust there at the bottom, not sure how I missed that before taking the shot. Drrrrrrrr....