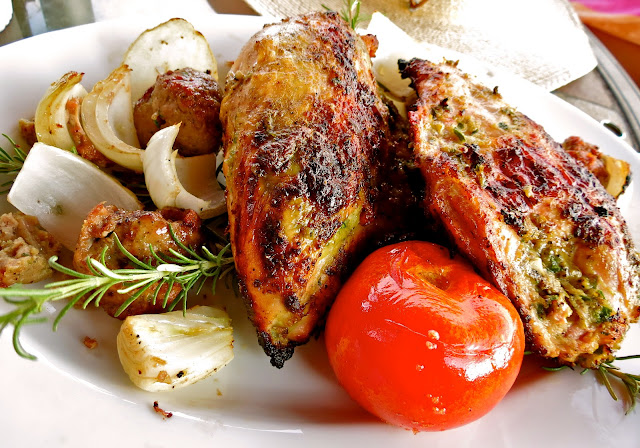 When I purchased my new car it came along with satellite radio and now I've become slightly obsessed with the Martha Stewart station. Yesterday they had Greek chef and restauranteur Maria Loi as a guest waxing poetically about Greek food. Inspired, I stopped off at Whole Foods on the way home to pick up some ingredients for a Greek Mixed Grill. I think I now get why people joke about Whole Foods as "Whole Paycheck" because this place is seriously draining my account! I have put myself on a $25 per diem allowance and have found it's been pretty fun shopping for daily specials and creating a menu around them. Ground lamb and veal were on sale, so I decided to grill some meatballs, organic bone-in chicken was on sale, so I threw that in the basket as well, plus some stuff for my low carb breakfast the next day. Oh and they had amazing artichokes begging to be grilled, so I bought some of those too. Total bill $24.92!

Prep work took about 35 minutes and was way worth it!

First in a food processor, I pulsed a medium sweet onion, 3 cloves of garlic, a green onion, about a tablespoon of dried Greek oregano, the zest of one lemon, plus a small bunch of Italian Parsley added at the end. I seasoned with sea salt and Cavendar's salt free Greek seasoning.

I then quartered the artichoke, scooped out the prickly, furry middle and set it inside a cold water bath with lemon juice to stop the chokes from browning. I placed them in my steamer to steam about 20 minutes.

I've found that if I don't have time for a long marinade, injecting meat works wonders! So we melted about a quarter of a stick of butter, added a few pinches of sea salt and injected the two chicken breasts until they almost burst. I could see how it would be fun for plastic surgeons to inject people with fillers! They end up looking just as plump as my chicken breasts! I then poured my onion mixture onto the chicken and under the skin, being sure to save about 4 tablespoons of the mixture for my meatballs and added fresh cracked pepper, sealed the chicken in a ziploc and placed it in the fridge to marinate for two  hours.

Meanwhile, in a bowl, beat the egg then add the reserved onion mixture and blend in with the ground veal and lamb. Form them into 6 meatballs and skewer them with onion on metal skewers. Wrap in foil and pop in the freezer for about 20 minutes to really help cure them, then move to the fridge.

Meanwhile after 20 minutes, remove the artichokes and dunk them in cold ice water to stop the cooking. Place them in a ziploc and squeeze the juice of the zested lemon in the bag and pour several tablespoons of olive oil into the bag, plus 2 chopped garlic cloves, sea salt and a dash of garlic powder.

Go pour some cocktails or jump in the pool for about an hour and a half. 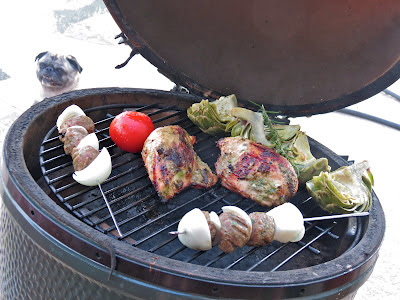 General Bubbles likes to keep a watchful eye on things. 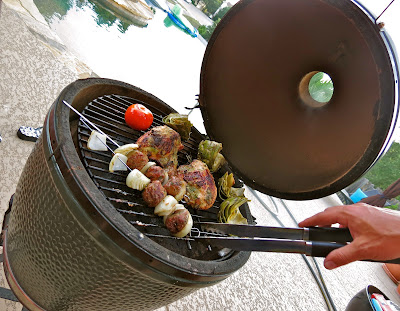 Michael really could be a hand model... 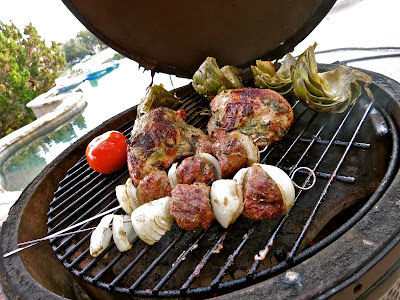 We served it with my smoked tomato and burrata salad plus grilled flat bread, Tzatziki sauce and had plenty of leftovers for the next day.  Absolutely delicious and makes me happy to be married to a Greek family!