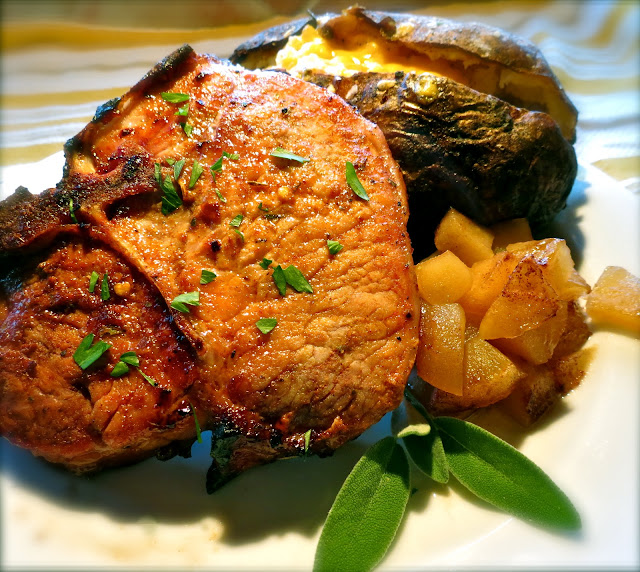 My friend's mother always baked her delicious ham in coca-cola, so I thought it would be nice to brine some thick cut pork chops using coca-cola instead of water. WOW!! That was a terrifically tasty idea! Our pork chops were tender and packed with flavor. We served them with a baked potato and cast iron skillet cinnamon apples, all cooked on the Big Green Egg, of course.

In a small sauce pan, add brine mix and a bottle of coke and heat until salt is dissolved. Remove from heat and add 2-3 cups of ice to cool the mixture. Pour over chops in a ziploc bag and brine for 8-12 hours. An alternative method is not using salt, but coke and the other brine herbs and soak overnight. Then we rinsed the brine off the chops, dusted it with our favorite rub recipe and got ready to grill. 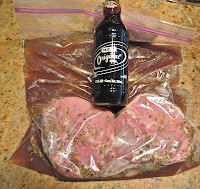 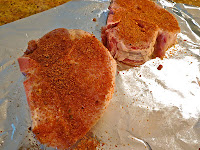 The next day, we heated up our Big Green Egg for indirect cooking with the legs of the plate up, and a grill plate on top. We cooked the chops for about 30 minutes, flipping once. They were so tasty!

For the Baked potato, we wrapped it in foil with coarse salt and cooked it high and fast on the BGE at about 500 for 45 minutes, then turned it down to 350 for the chops and apples.

I buttered a small cast iron skillet, added the apple mix, dotted with butter and cooked it on the BGE with the chops. They were terrific! You can also bake them in the oven at 375 for 40 minutes. They cook quicker on the BGE for some reason.
Posted by BeeCaveKitchen