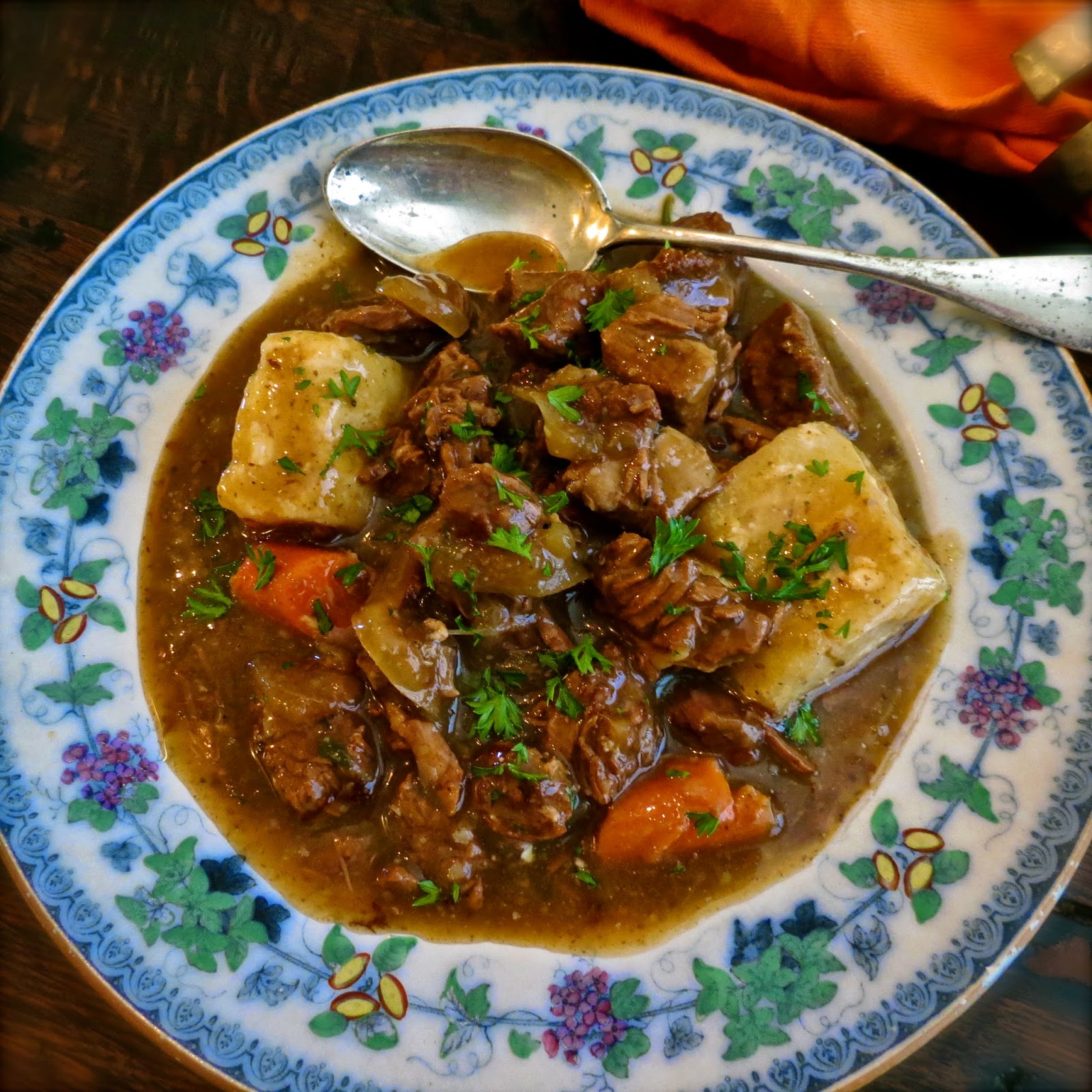 This weekend we had our first cold snap and while we were floating in the pool and grilling kabobs on Friday evening, we were snuggled inside while a chilly rain settled on us by Saturday morning. The weather was reminiscent of my childhood days visiting my mother's family in Belgium and it was a perfect day to prepare a slowly braised stew.

While the French classic beef stew, or beef bourguignon, is made with red wine, the Belgian version known as Carbonnade au Flamandes is made with delicious Belgian beer. The result is a slightly sweet and sour stew that freezes well for quick reheating on a cold evening. Belgium has two distinct cultures- the Flemmish (Dutch relation) and the Waloons. The latter speak french and reside in the southeastern part of the country and this is where my family originated; primarily from the Liege and the Ardennes before settling in Bruxelles. One interesting note I read in a cookbook, The Food and Cooking of Belgium, by Suzanne Vandyck was that since Belgium was at the head of the spice trade in the 16th century, its cooking was far advanced than those found in neighboring France or Germany! Take that snooty Frenchies!! Poor Belgium also does not get credit for inventing the "French Fry". One of my fondest and first culinary memories is of Les Friteries, or french fry carts that dotted the city of Bruxelles. Hot, fresh frites are served with a dollop of mayonnaise and wrapped tightly in a paper cone. Perhaps I should open a few around Austin as I'm certain they would be a huge hit?

My husband is an avid beer lover, so naturally he prefers the carbonnade to the French bourguignon version. Served with rustic toast smeared in mustard and dunked in the stew alongside a Belgian ale, it is hearty and satisfying. Since I must strictly avoid gluten and wheat, I have had to adapt the recipe to use gluten free beer such as Bards, but I STRONGLY suggest using a Belgian beer such as Chimay bleu or Trappistes Rocheford. However my gluten free version is still outstanding if not quite as rich as if I'd used a traditional Belgian beer. One final note- this can be made in an hour if cooked in a pressure cooker, but I prefer low and slow for 5-7 hours in the oven at 220. It tastes better reheated the next day.

1.) In a large enamel Dutch Oven, melt the butter and add the onions, celery and carrot with the sugar, flour, dash of Worcestershire and a few dashes of beer. Cover and cook onions on medium low for 30 minutes to caramelize.

2.) Meanwhile in a large frying pan, melt bacon until fat renders, add grapeseed oil and when the pan is screaming hot, brown the meat, one pound at a time so as to not crowd the pan which would steam the meat instead of sear it. Sear the cubes about 3 minutes until a brown crust forms on the outside. Reserve the meat on a plate.

3.) You may want to scrape up the brown bits in between browning batches with a little beer and pour that into the onions. Just add more fresh oil to the pan before searing the next batch. This step makes a rich and flavorful base for the stew.

4.) Once meat is browned and onions have softened and started to turn golden, add meat to onions in the large pot, the rest of the beer and herb bundle plus bay leaves and bouillon cube. Cover and let it work its magic in the oven at 220 for 5-7 hours. Serve in warm bowls and sprinkle with fresh parsley and steamed potatoes or Belgian Frites (Fries).

Though the dunked mustard smeared bread is a winning combination, a fresh green salad can lighten up the meal but it should definitely be served with a glass of Belgian beer.  As my mother would say before tucking into a great feast, "Attaquons!!"  ATTACK!! 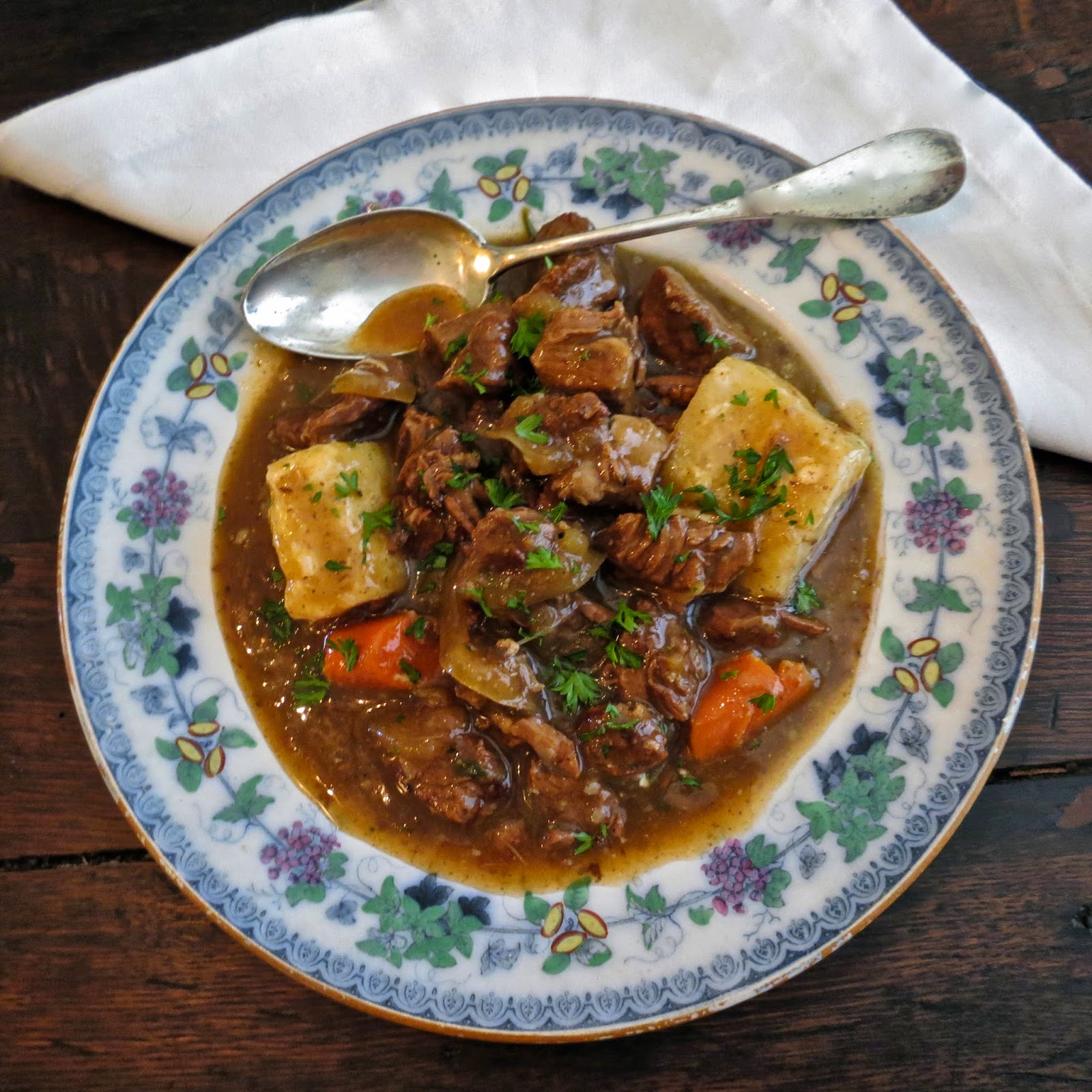 Makes about 6 servings
Posted by BeeCaveKitchen